For press inquiries or photos of previous challenges, please contact Amy Briskin at ABriskin@aol.com or 212-794-6633

Sports on Mars Winner Tyrone Hutchinson was in the Times of Wayne County, NY.

Tyrone was in the Democrat and Chronicle of Rochester, NY.

Detective Science Winners Caitlyn Taylor and Mason Wonka were in the TCPalm News of South Florida.

Caitlyn and Mason were in the Vero News of Vero Beach, FL.

Caitlyn and Mason were in the TCPalm News again!

Bio-Inspired Design Winner Olivia Smith Donovan was in the MetroKids.com of Philadelphia, PA and suburbs.

Girls Changing Science: Claire Dworsky is a typical 9-year-old, but what she found out on the soccer field is making history.

Remember first-year winner Claire Dworsky? She launched the largest study of its kind on the environmental impact of athletic fields using artificial vs. natural turf. This week, she presented her findings to the American Geophysical Union. Here's the poster [PDF: 259KB] she brought along to the conference. Way to go, Claire! 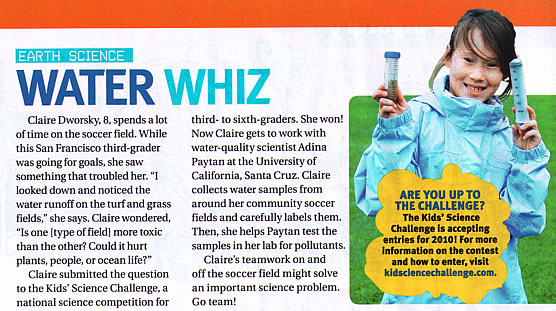 Bio-Inspired Design Winner at UC, Merced in May 2010.

Winners of the KSC raffle at the Girl Scouts of Greater LA Family Science Festival.

Michael Bream of Gravity Boards and Paul Schmitt of CreateAskate (2008-2009/year one):

If you would like higher resolution images for print stories or other purposes, please contact us: info@pulseplanet.com